Plenty of playoff positioning is on the line in the AFC

New England can win the AFC regular season title, and clinch home-field advantage throughout the playoffs, with a win in Miami or a Denver loss. Cincinnati needs some help to earn a first round bye as they need a win over Baltimore plus a Denver loss. Denver can go from the current second seed to the fifth seed if they loss to San Diego (and Kansas City beats Oakland) but a victory over the Bolts earns the Broncos a first round bye. Houston needs a win to secure the AFC South and, even if they lose, Indianapolis needs a win and plus the sun to set in the east to bump off the Texans. The Jets are in with a win over the Bills in Buffalo (or a Steelers loss) while a New York loss plus a Pittsburgh win pushes Gang Green to the sidelines and earns the Steelers the six seed in the AFC.

Carolina controls their own destiny as they claim the NFC regular season title with a win at home against Tampa Bay. The Panthers can back door their way in if they get beat by the Buccaneers and Arizona loses to Seattle. A Carolina loss and a Cardinals win would earn Arizona the top NFC seed. Green Bay and Minnesota meet at Lambeau Field on the Sunday Night prime time stage in a battle for the NFC North title. The Seahawks can claim the fifth seed with a win in Arizona plus a Packers win. A Minnesota victory moves Green Bay to fifth and Seattle to the six seed. Gossip that the Packers may tank to avoid Seattle in the first round is just yapping by talking heads stirring the pot. Minnesota is the hotter and healthier team and should win the NFC North on their own.

NFL Week 17 Parlay Prediction: While everything on the NFC side will be decided during the late game action, a whole lot of AFC positioning will be confirmed during the morning games. We like Cincinnati and Pittsburgh straight up over Baltimore and Cleveland. Also, well away from the NFL playoff picture, we like New York over Philadelphia. The Giants are at home and this may be the final game for head coach Tom Coughlin. The Eagles may want a win to stick it to fired head coach Chip Kelly but the G-Men are the better team in this NFC East rivalry match. Tie the Bengals, Steelers and Giants together with a five-unit parlay using the SportsInteraction money line prices. 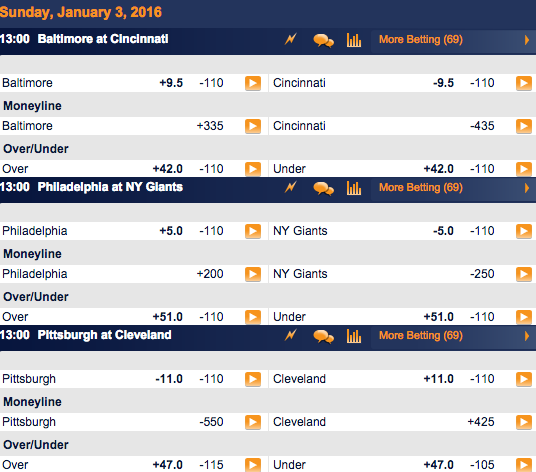