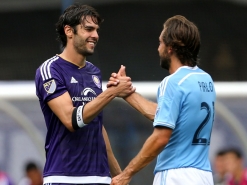 Thanks to many more transfers of older stars from top European leagues the past decade or so, the MLS soccer league has gained much more prominance and traction in North America. During it's early years the fan turnout was bleak at best across the league, but owners quickly recognized the power of name recognition and had no problem throwing large sums of cash at aging soccer stars from around the world. A guy like David Beckham really began the large trend of these past European heros coming over to North America. [+]

But it also didn't hurt that these guys were getting huge contracts from these MLS teams despite being at the end of their careers. Today's MLS league is no different as there are plenty of those European names across the league earning a pretty penny at the back end of their playing careers.

These guys get to come over and get consistent playing time, more often than not in huge markets like Toronto, New York, and Los Angeles, to further help set them up financially for the rest of their lives. This list counts down the 10 highest paid players in the MLS for the 2016 campaign.

Going from this list alone you'll see that it's typically the big city hotspots that not only can attract those big name transfers to come play for their franchise, but also the financial resources to make it happen. Eight of the 10 highest paid players in the MLS League play in either New York, Toronto, or Los Angeles, as those three financial hubs can give these players plenty of cash and marketing opportunities within that local market. It's a big reason why you'll see many more European transfers to these teams in the future as well.

Yet, it is interesting that the highest paid player - Kaka - got his contract from Orlando City as they don't necessarily fit the mold of being a financial powerhouse. But Orlando is doing its best to keep up with the others in this regard, even if Kaka's contract forces them to be a little weaker elsewhere on the field.

Knowing what these superstars are making in 2016 isn't really something MLS bettors concern themselves with. Yet, these large contracts bring plenty of expectations on the guys in this list and they are clearly expected to produce positive results. Knowing that there are multiple guys from the likes of Toronto, New York, and Los Angeles, chances are you will see some inflated soccer lines at times for these teams because everyone knows the high-priced star power they've got. That can definitely turn into a boom for a bettor's bankroll if they know when to pick the right spots against these overpriced teams and that's always something to look for in any sport.

Toronto FC is looking to accomplish something no other MLS team has ever done — win the CONCACAF Champions League Final. First, they’ll have to get past a tough Chivas Guadalajara side in a two-match set beginning Tuesday night at BMO Field in Toronto. TFC is off to a slow start but still head into the first leg as the favourites. Let’s take a look at the odds and betting lines for this matchup and offer our prediction for the final.
Read this article
Sports News - 01/03/18
Best MLS Teams To Bet on for 2018

Two short months ago, Toronto FC hoisted the MLS Cup for the first time in franchise history after the club defeated the Seattle Sounders in the championship. With the 2018 Major League Soccer season set to kick off, Toronto FC are once again the odds-on favourites to repeat as champions. Here are five teams that have the best chance of winning the MLS Cup in 2018.
Read this article
Sports News - 23/11/16
The 10 Best Soccer Players On Terrible Teams

Who’s too good for their team? With all due respect to their current club, here are 10 guys who we all wish played on a better soccer team
Read this article
Sports News - 23/10/16
Top 10 Toronto FC Canadian Players Of All Time

Bet On Major League Soccer With the MLS season wrapping up with Week 34 in the books, several teams await the playoffs and among them is Toronto FC. The Canadian club had a strong season finishing third in the conference with a +12 goal differential and a deep run in the playoffs is expected thanks […]
Read this article
Sports News - 30/09/16
Top 10 MLS Stars Mansion

The Posh Cribs Of Major League Soccer Major League Soccer took a while to develop into the sports product that it is today. Now, the league features the best North American players, as well as superstar international talent attracted to the MLS by solid pay and the constantly rising quality of play. Recently, Andrea Pirlo […]
Read this article
FIFA World Cup 2018