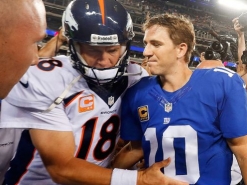 There is not much better than spending a Sunday watching football with family, cheering on the favourites or seeing the big underdog pulling off the upset. The only thing that may be better is playing football on the biggest sports stage in North America, with or against a family member. There are some families that have seen multiple members walk out onto the gridiron with their names stitched on the back of the jersey, but not everyone has seen all of them succeed. Counting down the top 10 family related NFL players of all-time.

Some players outshined their siblings, children or fathers it was too lopsided to pick just one. A good one that comes to mind is Aaron Rodgers and his brother Jordan – who is now more famous for being on the Bachelorette than his flash-in-the-pan preseason squad stints. The NFL has many families, not just players but coaches like Rob, Rex and their father Buddy Ryan. In fact, a whole list could be dedicated to NFL family coaches, but that will be saved for another time.

When watching the game with the family, doing some wagering on the games can make it even more exciting. The great NFL Betting page on this site will provide bettors with tips, scores, and links to even more information.

The Super Bowl is one of the biggest betting events in the world, drawing millions of sharp and casual bettors every year. This season is no different, with a full suite of Super Bowl 2019 odds that include thousands of Super Bowl prop bets. Our prop betting preview for Super Bowl 53 focuses on the best options to bet on, including pre-game, broadcast, half-time show and in-game wagering opportunities.
Read this article
Sports News - 21/01/19
Super Bowl 53 Odds - Will Patriots Lose Consecutive Super Bowls?

The most exciting pair of NFL conference final games in years have determined the competitors for Super Bowl LIII on Sunday, February 3rd – the New England Patriots and the Los Angeles Rams. Tom Terrific and Bill Belichick survived stiff challenges from the Chargers and the Chiefs to prove all doubters wrong, while Sean McVay and Jared Goff were the recipients of extreme good fortune during their controversial triumph over the Saints. Will Brady lose two Super Bowls in a row?
Read this article
Sports News - 14/01/19
NFL Conference Finals 2019 - Brady Passes The Torch

The 2019 NFL playoffs boil down to the four best teams in the league, promising a pair of outstanding clashes on Sunday, January 20th. New England will travel to Kansas City to determine the AFC conference championship, while the Los Angeles Rams will visit the New Orleans Saints for the NFC championship. NFL odds this week favor the Chiefs and the Saints by a field goal, with the expectation of home advantage lifting Kansas and New Orleans to Super Bowl LIII.
Read this article
Sports News - 07/01/19
NFL Divisional Playoff Odds 2019 - End Of Patriots Era?

Three of four road teams won on wild card weekend, setting up a fierce foursome of fantastic NFL divisional round clashes. Listed as one of the best teams for Super Bowl 2019 odds, the Patriots dynasty may end against a fantastic Chargers squad. The Chiefs, Rams and Saints appear ready to defend their home field against the Colts, Cowboys and Eagles, likely to beat the spread against inferior opponents.
Read this article
FIFA World Cup 2018