A Possibility of Hefty Payout for Vegas Sportsbooks

My Team's Next MatchVegas Golden Knights

The Vegas Knights are four wins away from making history — becoming the first team in National Hockey League history to win the Stanley Cup in its inaugural season.

With that comes the possibility of hefty payouts for Las Vegas sportsbooks.

Hundreds of thousands — maybe even millions — of dollars will be paid out if the Knights, who were 500-to-1 underdogs of winning outright before the season began, take down the Washington Capitals in the final.

At those odds, anyone that bet $1, would walk away with a $500 payout. It didn’t seem likely at the time, but Vegas’ dream season could be a costly one for sportsbooks in the city.

“The lights might be a little dimmer and we might have to raise the price of our chicken fingers,” vice-president of the Las Vegas Hotel & Casino SuperBook Jay Kornegay told CNN Money.

As the season went on, more and more money came pouring in and the odds got lower on the Knights. Kornegay said it’s the high volume of small bets on the Knights that will be a huge expense if the Western Conference champions do the unthinkable.

The series begins on Monday, May 28 in Las Vegas, as the Knights host Game 1 of the series at T-Mobil Arena.

Vegas opened as -135 favourites to win the Stanley Cup, but look for that line to move frequently leading up to the series opener.

Let’s take a look at some of the early odds and betting lines and offer a prediction for the 2018 Stanley Cup final with odds courtesy of Sports Interaction.

One thing is for certain when the Golden Knights and Capitals clash for Lord Stanley’s Mug — one of these teams will win a championship for the first time.

For the Golden Knights, it goes even further as the Western Conference champions can become the first team in NHL history to win a Cup in its first season in the league.

As the spotlight continues to shine on the remarkable season the Golden Knights have had, it’s hard not to talk about Capitals captain Alex Ovechkin, who will play in his first Stanley Cup final.

“We still haven’t reached our goal,” Alex Ovechkin said following his team’s Game 7 win over the Tampa Bay Lightning. “This is going to be a huge step forward.”

A year ago, the Capitals were among the Cup favourites before being ousted by the Pittsburgh Penguins in the second round. Heading into the 2018 Cup final, Washington is the intriguing +115 underdog — a line many bettors will be jumping all over leading up to the championship round.

Vegas has played four less games and lost four fewer games than the Capitals. However, when you break down the stats between these clubs, you’ll notice they aren’t very far apart. 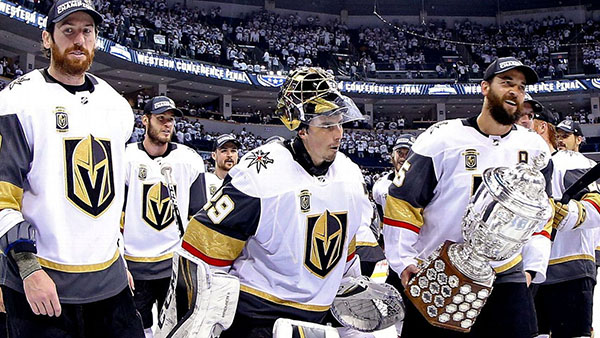 The Golden Knights like to skate, but can shut things down in their own zone, as the club has allowed just 27 goals in the playoffs while also holding opponents to 1.80 goals per game. The test will be tougher against a Capitals team that is averaging 3.47 goals per game.

Vegas goalie Marc Andre Fleury, who is seeking a fourth Stanley Cup ring, can expect to see a lot more rubber against the Caps, who have posted a shots per game average of 32.9.

The Capitals and Golden Knights locked horns twice this season, with both games going to Vegas. Their last meeting was on Feb. 4 and the Knights skated away with a tightly contested 4-3 win.

Golden Knights vs Capitals Against the Spread

Thinking of betting against the spread on either of the Stanley Cup finalists? The Golden Knights are your better bet, as the Western Conference champs have posted a 60-37 record to this point, compared to the Capitals’ mark of 51-50.

Dissecting the numbers even further, the Knights are a stronger ATS wager on the road as the club has posted 34-15 mark away from T-Mobile Arena. Washington has been dreadful against the spread on home ice, posting a 20-30 record at Capital One Arena. 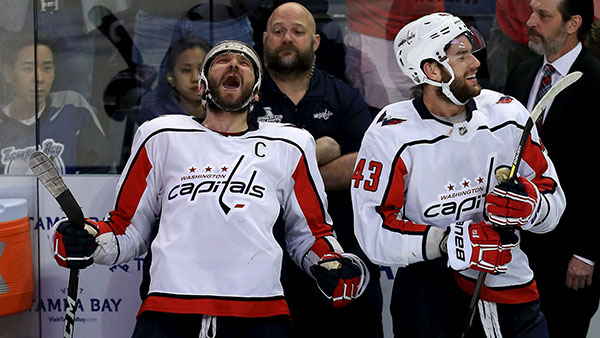 The Golden Knights have been proving all the doubters wrong throughout the entire 2017-18 campaign. After posting a 51-win season and winning the Pacific Division, the expansion Golden Knights became legitimate contenders to win the Stanley Cup.

However, while this is also a new experience for the Capitals, the Eastern Conference champions boast more firepower upfront — led by Ovechkin and Evgeny Kuznetsov. It will be hard to contain the star power Washington has. After years of pain, it’ll finally be Ovi’s time to shine.