Hockey fans couldn’t ask for more as we head into the final 17 days of the 2014-15 NHL regular season. The crazy races are making puck action must see TV and they have also brought major changes to the SportsInteraction Stanley Cup futures betting board. Preseason leaders Chicago (1st to 5th), Boston (2nd to 15th) and defending Cup Champion Los Angeles (3rd to 11th) are almost nowhere to be found right now. Anaheim, who were fourth favorites back in October, along with New York who were 13th, are now tied as top chalk to capture the Stanley Cup Championship.

Stanley Cup “next four” are very tight bunched at SportsInteraction

Tampa Bay's Cup odds have crashed from +1400 in October to +850 and they are tied as third favorites with Montreal who opened the season with a +1700 money line price. The Blackhawks, who were top chalk at +640, are tied as fourth favorites with St. Louis as the Blues number has shrunk some from +1200 down to +900. The Cup Champion Kings have kicked things up recently to get back in the playoff race but their price to win back-to-back titles has dropped from +1000 down to +1600. The chase for Lord Stanley's Mug is a real life, action packed, Amazing Race.

2014-15 Stanley Cup Championship Futures Call: Feeling the Big Apple Boys, who may have home ice advantage throughout the playoffs, are going to bash their way through the East, their +800 ML price is very attractive. Our 200 unit futures bet stands to earn a 1600 unit return and it sets up with a guaranteed winner should the Blueshirts make it to the Stanley Cup Final. The prices below, currently ripe with generous returns, are subject to change at any time so act today! 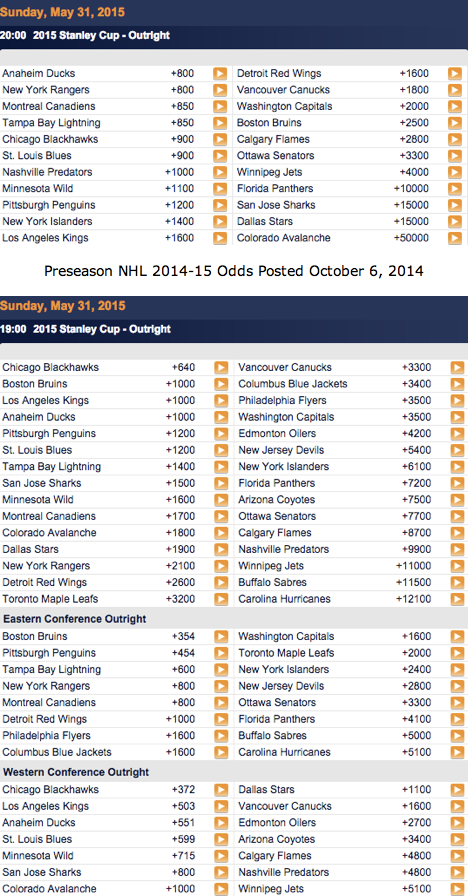