Despite a mediocre 9-11 recent run, Los Angeles continues to the lead the National League West as they hold a four game lead over the San Francisco Giants. Though shelled 8-0 by the NY Mets at home yesterday, the Dodgers have posted a 7-4 mark over their last eleven games. With four of their eight starters now on the shelf, RHP relief pitcher Yimi Garcia (3-2 ERA 3.82) gets the call to the hill in SoCal tonight. Garcia has given up 15 runs during 35.5 innings - all in a reliever role.

Philadelphia Phillies: Dead last in the Majors and 19 games back in the NL East

Pathetic. That sums up the Phillies production during the first half of the 2015 MLB season. They won’t match the MLB modern era worst regular season mark, 36-117 posted by the Philadelphia Braves in 1916, but the Phillies are on pace to post a 56-112 record this season. Philadelphia has a 4.60 team ERA and the pitching staff is giving up an average of five runs per game. After allowing up 12 runs in his last two starts, RHP Sean O’Sullivan (1-6 ERA 5.76) toes the rubber for Philly.

MLB Game Total Betting Call: Starting and relief pitching are nothing to write home about here. Fans of high-scoring MLB action get solid bang for their buck at Phillies games. Averaging 11.26 runs per match, 13 of the Phillies last 19 contests have produced ten or more runs. The Dodgers have scored four or more runs in seven of their last eight victories. It costs us little but we’ll wager 500 units on the seven runs posted with the Alternate Over/Under price at SportsInteraction. 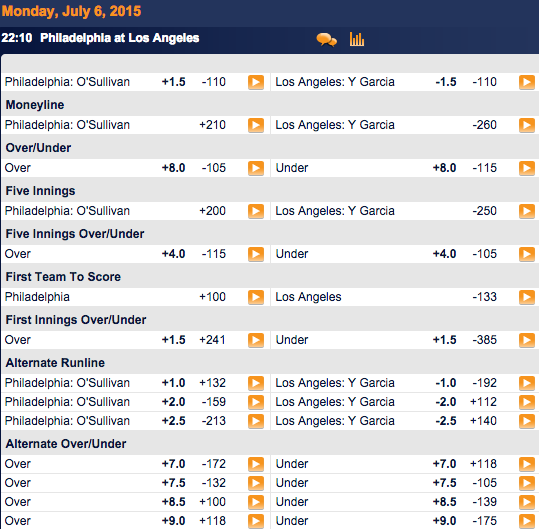