Led by All-World goaltender Henrik Lundqvist, New York heads into the East Final as the favorites over Tampa Bay. Lunqvist is the front-runner to win the Conn Smythe award (NHL playoff MVP) as he has posted eight playoff wins and a sparkling 1.60 goals against average. The Rangers amazing run of one goal games currently sits at 14 straight and it will never be topped once it finally ends.  The Lightning got a brief scare from the Canadiens but, after being up 3-0, the Bolts closed out Montreal with a 4-2 series win. The going gets considerably tougher versus the Blueshirts.

Following a sweep of Winnipeg in their opening playoff round, Anaheim, took down Calgary 4-1 in the their semifinals series that looked like Men playing against Boys. The Ducks have been very solid at both ends of the rink as they are 8-1 in the postseason and have outscored their opponents by a 35-18 margin. Chicago struggled somewhat during their 4-2 quarterfinal series win over Nashville but then whacked the Minnesota Wild 4-0 to advance to the West Final. The Hawks have enjoyed ten days of rest while the Ducks have been off for seven days.

Conference & Stanley Cup Prediction: Being as we locked the Rangers in with a +800 price to claim the Cup back on March 27, we will stay away from the NHL Championship prices posted at SportsInteraction. Instead, liking the depth in Chicago, we are backing the Blackhawks with a 300 unit wager to win the West versus the Ducks. 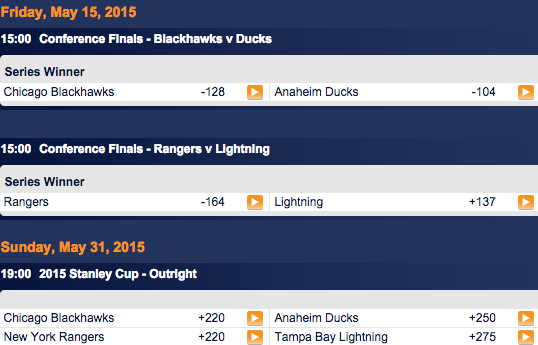