Following the Steelers loss to Baltimore on Sunday, Cincinnati has clinched the AFC North title and now they have their sights set on bigger prizes. A victory tonight assures the Bengals of a first round bye and, with New England laying an egg in New York yesterday, Cincinnati still has a shot at first overall in the AFC. The latter requires the Patriots losing to the Dolphins in Miami plus the Bengals beating the Ravens at home during Week 17 action. QB Andy Dalton is still out so AJ McCarron starts his second game under center tonight. The rookie out of Alabama has been "decent" since Dalton went down as he is 37 of 53 for 472 yards, three touchdowns and two interceptions.

Denver Broncos: Still control their own destiny while untangling from a two-game crash

Cruising along at 7-0, though their hot start wasn’t without some warts, Denver has been on a rollercoaster ride recently as they lost two straight, then won three and a row prior to entering tonight’s contest following a 15-12 home loss to Oakland in Week 15 and a 34-27 pounding in Pittsburgh last Sunday. The Broncos (10-4) still control the AFC West and a victory tonight would keep them a game ahead of the 10-5 Kansas City Chiefs who opened NFL 2015 with a 1-5 record. QB Brock Osweiler makes his sixth start here but, due in part to the Broncos run game lagging and his receivers his dropping passes, he has lost his last two starts after winning three in a row.

Cincinnati vs Denver NFL Week 16 Decision: The Bengals beat the Broncos 31-23 in Cincinnati during Week 16 action last season. Frigid weather greets everyone in Mile High Country tonight as the game time temperature will hover around 18°F (-8°C) and it’s forecast to drop even further. With tons of money coming in on Denver (82%), it’s worth noting that five of the most heavily bet games fell in favor of the Public in Week 15 but four of the top five games swung back to the books so far in Week 16. With a pair of backups under center here, defense is the stronger unit for both of these teams tonight. Expecting a low scoring affair here, we are backing the UNDER 43 total points with a 500 unit wager on the alternate game total prices posted at SportsInteraction. 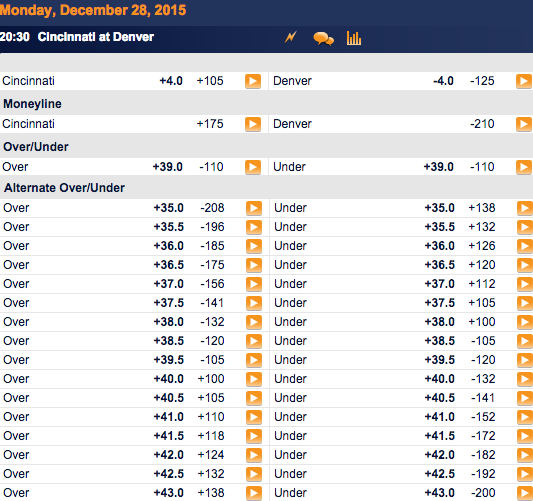