Firing out of the starting gate, with a 13-0 streak to begin their season, the Michigan State Spartans made an early statement that they would be contenders in the March Madness Tournament. The winning run included signature wins over then #4 Kansas Jayhawks, who ended the season as the top seed, and the #24 ranked Louisville Cardinals who finished #16 overall in the Nation.

A stumble, by their lofty standards, saw the Spartans return from the Christmas break and post a sluggish 3-4 stretch that included two losses by just one point. Busting out of their slump, the Sparty’s defeated the #7 ranked Maryland Terrapins 74-65 and closed their season on a 13-1 run. The lone loss was to #18 ranked Purdue Boilermakers (82-81 OT) on the road in West Lafayette, IN. 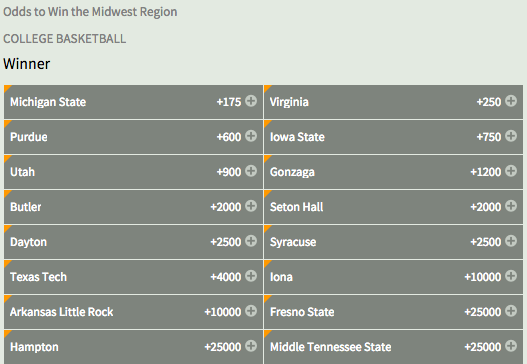 Close on the Spartans heels, Bodog has the Virginia Cavaliers (29-5) posted as second favorites in the Midwest Division. That goes against the March Madness selection committee who have the Cavs as the top seed over Michigan State. We were surprised the committee made Virginia the #1 seed after they lost 61-57 to #7 North Carolina Tar Heels in the ACC Championship game.

Aiming for their first NCAAB National Championship since 1932, Purdue slides in as the third favorite in the Midwest Region. The Boilermakers posted a 26-8 record and finished third in the Big Ten Conference behind Indiana and Michigan State. We view the Spartans as having the easiest path to the Final Four and we are backing Michigan State with a five-unit wager at Bodog.