Somewhat surprisingly posted as a +3300 underdog to win the 2015 MLB World Series back in the preseason, Kansas City is the top favorite to claim the Fall Classic at the half point of the season. The Royals head out of the break with an American League best 52-34 record and a 4.5 game lead on the Minnesota Twins in the AL Central. After they posted a 42-47 first half record, good for last place in the AL East, preseason top chalk Boston has seen their price drop from +1000 in March to +2500 today. The Los Angeles Angels are now the second favorite squad in the Junior circuit.

Though not a huge underdog in the preseason, with a +1200 World Series price, posting a MLB best 56-33 first half mark has St. Louis tied with Washington as Fall Classic chalk in the National League. Given that the Nationals are sporting a less than impressive 48-39 record, good for a slim two game lead on the New York Mets in the NL East, we are a little surprised by the bookmakers continued respect for Washington. That said, we are sticking with the Nats and LA Dodgers, who are now third favorites in the Senior circuit, as our picks to win the 2015 MLB World Series. 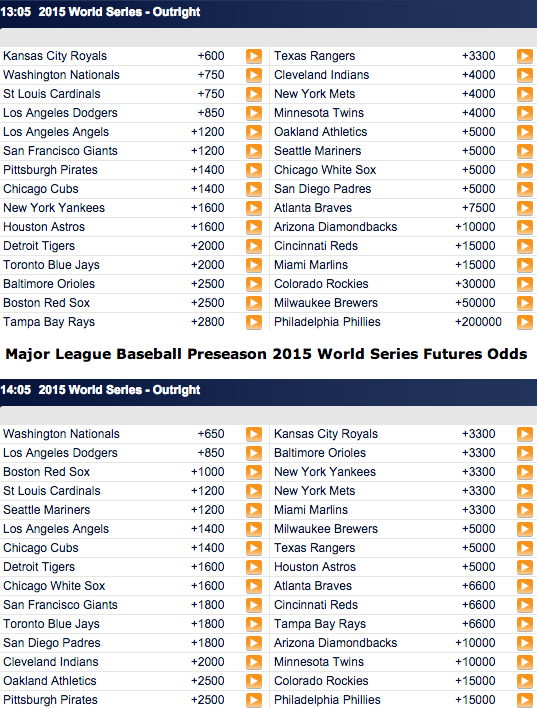