Led by two of the best pitching staffs in the Majors, Washington and Los Angeles will open the MLB regular season as top chalk to capture the 2015 World Series. The Dodgers will trot out studs like Clayton Kershaw and Zack Grienke while the Nationals arsenal includes Max Scherzer and Stephen Stasburg. It’s not all about the arms as both squads will send a solid line up to the plate as well.

Red Sox, Cardinals and Mariners round out the top five favorites

Perennial contenders Boston and St. Louis are joined by Seattle to round out the Fall Classic top five at SportsInteraction. Boston, who posted a 71-91 record last year, will need to win at least 25 more game this season in the competitive AL East. The Cards, also with a wealth of pitching, look like the class of the NL Central while the Mariners will battle the Angels and Athletics in the AL West.

MLB 2015 World Series Prediction: Try as we might, we can’t see anyone but the Nationals or Dodgers representing the National League in the World Series. Being as their lines are still fairly thick, we'll back Washington with a 250 unit futures bet and Los Angeles with a 150 unit wager to claim the Fall Classic. If either squad plays in the MLB Championship, we can set up a guaranteed payout once the World Series prices are posted at SportsInteraction when Rocktober rolls around. 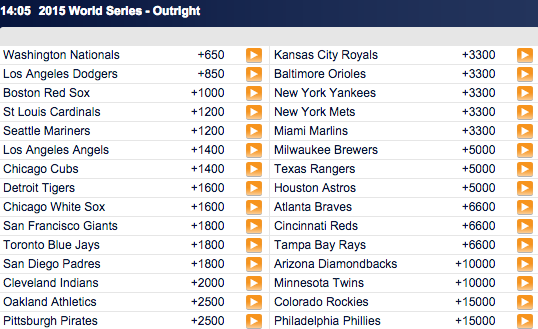