Though well positioned in the Eastern Conference race, the Wings need to be better defensively, on special teams, and play with a little more urgency. Detroit was the last team in the NHL to lose back-to-back games in regulation time when the Bruins bounced them 5-2 yesterday. The Wings gave up two power-play goals and Boston scored twice while they were short-handed on Sunday. Detroit was up 2-0 in their previous game against Calgary but lost 5-2 to the Flames on Friday night.

As compelling as some of the playoff races are, the Battle for the Basement is intriguing as well. Though Buffalo has had a Do Not Disturb sign out for the majority of the season – Edmonton and Arizona are both banging on the door and trying to get in. The ruler of the Cellar receives a 20% chance of landing “Next One” Connor McDavid in the 2015 NHL Entry Draft. With all three teams having 16 games remaining, the Sabres have a four point “lead” on the Oilers and a six point bulge on the Coyotes in the CMCD Sweepstakes. Edmonton doesn't deserve another #1 selection.

Red Wings vs Oilers Prediction: Whether tanking or not – this is an Oilers squad that’s been leaking loses all season long. Though three were against playoff contenders, Edmonton has lost four straight games by a 16-8 margin including a 7-4 crushing in Carolina yesterday. Detroit still has a decent shot at being the top seed in the East and they need to make hay versus non-contending clubs. We are riding the Red Wings with a 500 unit wager on the Bet365 puck line price. 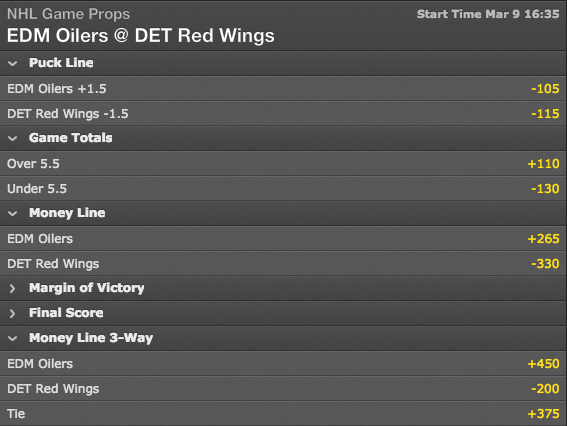