Sending out a shooter that many are calling a “superhorse” legendary trainer Bob Baffert is looking for his fourth Kentucky Derby win. Following his romp in the G1 Arkansas Derby, American Pharoah leads the field as a 5-2 favorite in Kentucky today. Also trained by Baffert, Dortmund is second chalk at 3-1 after he cruised to a 4.5 length win in the Santa Anita Derby.

Trainer Todd Pletcher is looking for his second Derby Win after he won with Super Saver during the 2010 Run For The Roses. Carpe Diem, with John Velazquez on board, won the GI Blue Grass Stakes and he goes off with an 8-1 price. Materiality won the G1 Florida Derby in late March as he dueled with Upstart down the stretch and he is the fourth favorite with a 12-1 line.

141st Kentucky Derby Prediction: We are backing Dortmund, American Pharoah, Frosted and Materiality with a $4.00 Trifecta Box ($96 cost) with the SportsInteraction Racebook prices. 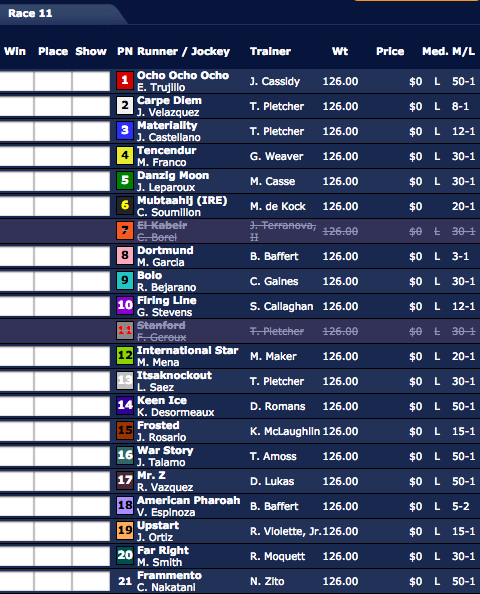