My Team's Next MatchNashville Predators

The 2017 Stanley Cup Finals have finally arrived and we are going to get a great story no matter who end up carrying Lord Stanley's Mug around the ice. If it's the Penguins, we will be talking about their ability to repeat as champions and the fact that their core would have three Stanley Cup rings. If it's the Predators, it will be the first ever Cup win for a franchise who hasn't been afraid to make the bold move when building this roster via trades and signings over the last few years.

Given that this series opens up in Pittsburgh, it's no surprise that the defending champs are listed as heavy home favorites tonight. The current (-160) line has been bet up to that number after early bettors hit the opening -140 number, but we very well could see these odds move back a bit Nashville's way the closer we get to puck drop later on today.

However, what is surprising about the odds for tonight's game is the fact that they put out a total of 5.5, especially since the only Nashville playoff game this year that wasn't lined at a flat '5' was Game 1 of the opening round against Chicago. Predators games have only combined for six or more goals three times during their entire 16-game playoff run so far, and with Game 1's typically being a strong spot for 'under' bettors, hanging a 5.5 - even at underdog odds - is surprising.

There is an old adage in sports betting that when a line looks too good to be true, it usually is. That's likely the case with this total for Game 1 as bettors who have been backing 'unders' for Nashville playoff games all spring long, and other bettors who know Game 1 of the Finals tends to be a little nerve-wracking for the players and goals can be hard to come by. They see this 5.5 number and see it being too high for this situation.

However, both of these teams prefer to use their speed and skill to gain the advantage, and both regular season meetings between the two had six goals scored. This entire Stanley Cup Final might be one of the faster-paced ones we've seen in awhile, and it should start tonight with a hotly contested, high-scoring game between the two.

With Game 1 of the Finals just hours away, there isn't much time left to get down any pre-series future bets on who you like to win it all, the Conn Smythe Trophy (MVP), or any other wagers you've been eyeing the past few days. All of the sportsbooks listed below have great options in all those betting fields, and should you be a new user there, there are signup bonuses and other lucrative offers that are second to none. You can always come back as the series goes on to take a look at the current series prices and try to put yourself in a guaranteed spot to make money. 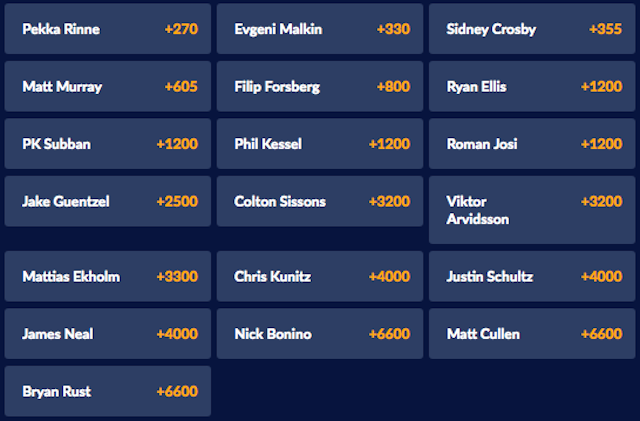 As shopping around for the best possible line is key to any sports bettor's success and having account(s) at these sportsbooks is one of the first steps in that long-term practice.