The Toronto Raptors have tasted little success over their 21 season history, winning 50 game during the regular season only once. During the Raptors first 20 seasons in the NBA, they only won a single series, when Vinsanity lifted them to near-relevance in 2001. After a lengthy struggle, including terrible draft picks and trades, current management has developed an All-Star backcourt that ranks among the best in the NBA, in addition to a stockpile of young talent. 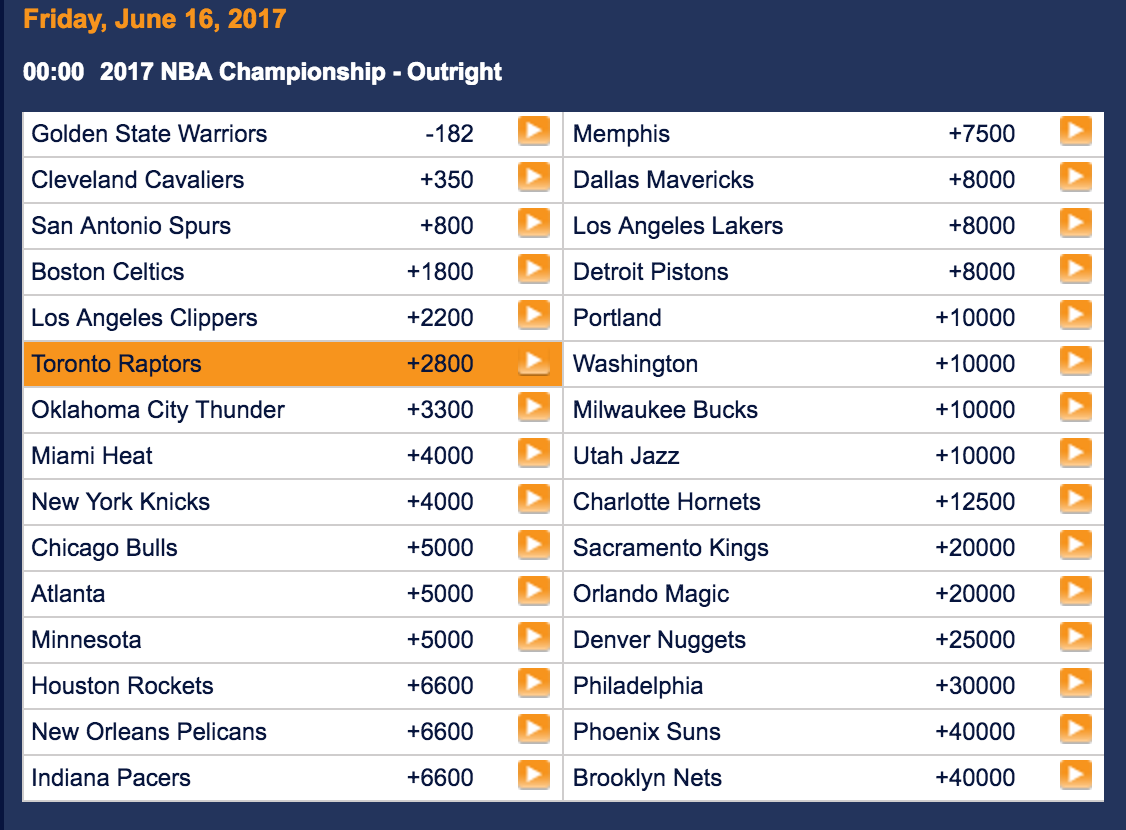 Similar to the Portland Trail Blazers, the Toronto Raptors have a fantastic backcourt that leads the team to victory more often than not. Despite performing well for the past three years, the Raptors are still considered to be a dark horse compared to teams like the Spurs, Clippers and Celtics, who occupy the second tier of the league just below the Golden State Warriors and Cleveland Cavaliers. As a result, even though they showed an ability to hang with LeBron and company, a successful bet on the Raptors will result in a big payday.

The core of the Toronto Raptors was maintained despite rumours that DeMar DeRozan would return to his hometown to play for the Lakers, who are desperate to throw money at free agents. As a result, if healthy, DeRozan, Kyle Lowry and Jonas Valanciunas will likely repeat as NBA Atlantic Division champions. The loss of fan favourite Bismack Biyombo will hurt them on the glass, but the emergence of Norman Powell and a healthy year from DeMarre Carroll will go a long way to make up for this loss.

How far the Raptors go will likely be determined by the quality of their role players, including recent draftees who will be expected to fill the shoes of Biyombo. Both Jakob Poeltl and Pascal Siakam show promise as rookies, but long-term project Bruno Caboclo is the wildcard as a six-nine small forward with ridiculous athletic gifts. Similar to how Powell emerged to play a key role, the sudden emergence of Caboclo could add another, deadly dimension to an already deep Raptors squad.

My Team's Next MatchToronto Raptors

While the Boston Celtics are considered to be the second best team in the east on paper after the addition of Al Horford, there’s no sign that the Raptors won’t be able to recreate their success in 2016. The team might not be able to win 56 games again, but they’ll most certainly enter the NBA playoffs with home court advantage in the first round. Rivals such as the Pacers and Knicks improved slightly while the Bulls regressed, opening the door for Toronto to make another deep playoff run in 2017.