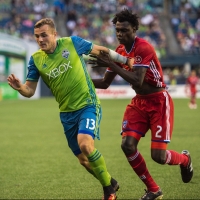 Seattle joined the Western Conference of Major League Soccer in 2007, establishing themselves quickly as a contender in the western conference. During their short time in the league, they’ve enjoyed quite a bit of success, earning a Supporters’ Shield and four U.S. Open Cup championships. Ownership focused on attracting top management and player talent, resulting in Seattle Sounders betting odds from sportbooks which list them as favorites in most of their matchups.

The Seattle Sounders betting odds today will be listed here throughout the season, giving you updated numbers directly from reputable sportsbooks. Compare the moneylines for both teams with multiple betting services to make sure you’re getting decent value for your wager.

As the Seattle Sounders grind through the MLS regular season, this part of the website reflects updated results after every matchday. The Seattle Sounders schedule widget includes past moneylines for both teams alongside the final score.

Consult multiple moneylines when placing a wager on the Seattle Sounders. Before the game, sportsbooks will set different odds, with some sites offering a better payout than others for that specific game. If you don't already know, the lines will reveal which team is considered the favorite and the squad that’s considered the underdog. These odds are also influenced by betting pools, which means that the opinions of people betting on the game play a part in setting the lines.

If the Sounders are listed at -275 when playing against the Whitecaps, and the Whitecaps have a line of +225, you can be sure that the Sounders are considered strong favorites to win. In fact, since they have a superior chance of winning, you’ll need to put up $275 to win $100 on a Seattle bet. Since the Whitecaps are the underdog in this scenario, you only need to bet $100 to win $225.

The fact that regular season MLS matches can end in a draw throws a wrench in the prognostication process. If a tie is listed with a moneyline of +400, you’ll win $400 on a $100 draw wager. Depending on how familiar you are with the MLS, you might decide to engage in prop betting, also called side betting, expanding the number of opportunities you have to benefit from your knowledge of the game. The types of prop bets that you can place include predicting a clean sheet, or the number of goals scored in the second leg of the conference finals.

If you’re adventurous and feel you have insight on the upcoming match, you can even wager on which team will score first or the player who notches the winning strike.

Seattle has been a top franchise since joining the MLS in 2009, earning a playoff spot every year they've been in the league, appearing in the MLS Cup for the first time in 2016. Incredibly, the Sounders managed to win three of their four U.S. Open Cups in their first three years of MLS play.

Solid defense has been their key to success, keeping them on track as western conference contenders for nearly a decade. Betting on the Seattle Sounders tends to be a wise decision, especially when they're playing at CenturyLink, which is one of the most intimidating pitches for visitors in the MLS.