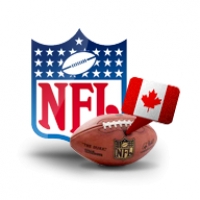 Since the NFL’s merger with the rival American Football League (AFL) in 1970, the AFC has been the home of some of the most exciting football ever played, and a few modern sports dynasties. The Denver Broncos, the Pittsburgh Steelers, and the New England Patriots have each won 8 AFC titles. Most recently, The Patriots have won twelve AFC East titles in 14 seasons, since 2001 when Tom Brady was paired with Bill Belichick. The conference has also won 22 of the total Super Bowl games, since it kicked off in 1971.

Place more informed bets by checking your AFC odds today. Use the table below to plan this week’s action from the best lines in the business, and bookmark us to stay in the know all season long.

Here are the current AFC Standings. These statistics are up to date. Feel free to use them to plan your bets, or simply stay on top of this season’s NFL action so far. Find out who is on top, and who is struggling to score this season.

The AFC has been a top-heavy conference for a long time, with The Denver Broncos, the Pittsburgh Steelers, and the New England Patriots all taking turns dominating for the last few decades. All 3 are currently relevant contenders, and poised to win a lot of games, year after year. The Patriots have been on a particularly prolific rampage, and have been winning for the last 20 years.

At the other end of the spectrum, the lower tier teams may win under a handful of games each season (sometimes 3 or 4). Making an underdog winner out of them takes an extremely well-placed and well-timed bet. In the AFC’s middle class, things are far more competitive. Any team can potentially beat the other one “on any given Sunday,” as they say. Keep in mind, home field advantage is not the statistical leg up it’s billed to be, despite these team’s massive crowds.

The injury report is a must-read every weekend. With football being such a physical game, you need to be up-to-date on who will be missing when you’re trying to pick an underdog favourite, bet against the spread, or pick a winner between two seemingly evenly matched teams.

Bookmark this page and come back to see us often to get Canada’s sharpest lines and all the help you need to bet on AFC football.